Little is known about the presence and names of women film directors in our cinema although some of the most famous and loved Bulgarian movies have been created precisely by women. This is the main reason for me to become the initiator of the creation of a specialized website and in this way to present them to the audiences. Thus everyone who is interested in the Bulgarian cinema will be able to better get to know the very women directors and their movies which have been acclaimed by the audiences, represented our country abroad and brought us numerous awards.

I must admit that when my intention to create such a site was announced, along with the exclamations of approval and praise there were also quite naturally asked questions like, "Why?" and "How come?". The only possible answer was and remains: "Why not?"

It all started when I heard for the first time about the problem of inequality between men and women film directors in the cinema industry at the General Assembly of FERA- the European Federation of Film Directors.

An article of Julio Talavera about facts published in the study of the European Audiovisual Observatory says that out of 15,583 films made between 1996 and 2012, 10 605 were made by men film directors, while only 1953, or 18.4% of the total – by women film directors. The history of one of the most renowned film festivals - the Cannes Festival has recorded only one case of a female film director to have won the Grand Prix –  the “Golden Palm”: it was Jane Campion for the film “”The piano”. Throughout the long history of the “Oscar” awards which began back in the distant 1939, it was only in 2010 that a woman won for the first time the “Oscar” award for best film director:  Catherine Bigelow for the film "The Hurt Locker."

In the history of the Bulgarian national cinema festival, dating since 1961 throughout all its editions to this day, only four women have won the "Golden Rose" award:

The competition program at the 31st and 32nd editions of the festival (2013 and 2014) did not include even one film by a female film director. At the 33rd edition of the festival in 2015 out of 13 feature films presented only three films of female directors participated.

At the 34th and 35th editions of the "Golden Rose" festival out of a total of 27 films, 6 were directed by women, while another two were jointly made by male and female directors.

For the period 1992 - 2014, from a total of 36 debut films made there were only 8 made by women film directors. Many of the women who dare to shoot feature films are left with only one realized film.

In recent years, the National Film Center has defined support for debut films as its priority. Over a period of three years, 2015-2017, a total of 43 full-length feature film debuts applied for subsidy, 20 of them being made by female directors. No one of the women applying for a debut film has received funding.

On its site www.nfc.bg the Executive Agency "National Film Centre" published information on the applicants for state co-financing of projects for feature films for the period 2005 - 2017.

The published data, as well as the attached diagram show that out of a total of 577 applicants for projects, 474 were by men and only 103 by women.

Projects for feature films submitted to EA NFC for co-financing for the period 2005 - 2017. 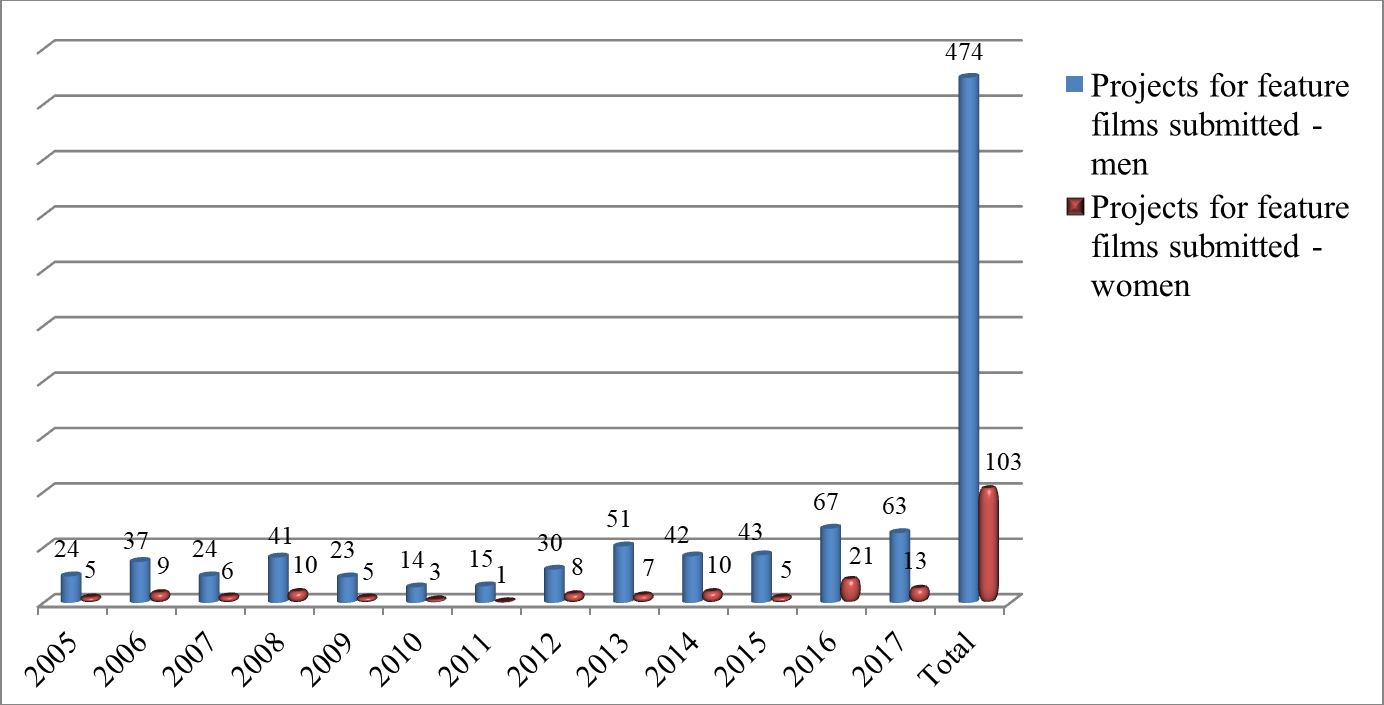 Over the same period 2005 - 2017, 91 feature films were completed with the financial support of the Executive Agency "National Film Centre". Of these, 76 were made by men and only 15 - by women. 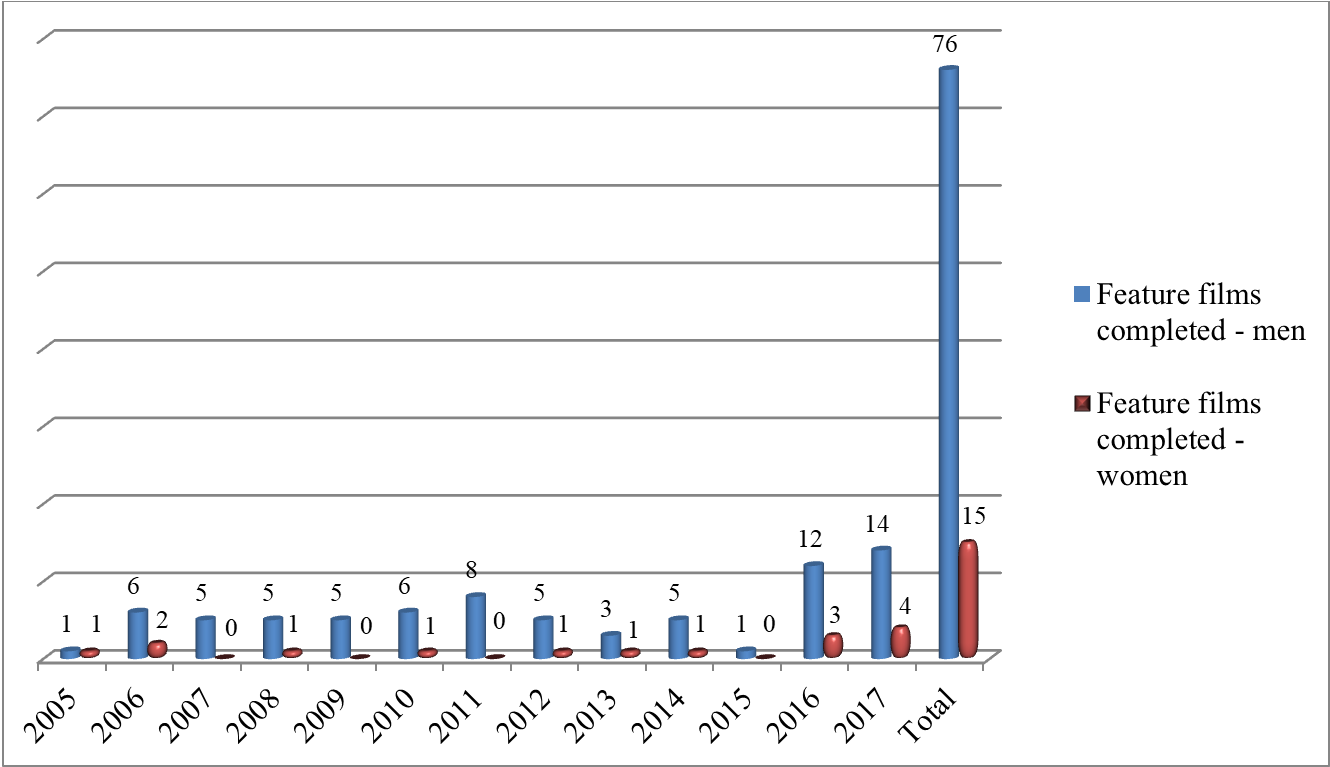 Since the establishment of the National Academy for Theatre and Film Arts - NATFA in 1973 till 2015, 130 men students have been trained in the major of film and television directing, as 45 of them have made full-length feature films.

At the same time women students trained in the same major accounted for 63. Only 11 of them have made their feature film.

In my capacity of film director and producer, dealing with cinema for many years, I am aware that in our country there are many talented, creative and competent women who make movies, but stay in the shadow, outside the focus of attention on the part of media, spectators and professionals.

The site includes the names of those women directors who have made a full-length feature film for the big screen. Presented are women directors of the older and middle age generations with many and also awarded films, starting from the pioneers in the Bulgarian women's cinema Lada Boyadjieva, Binka Zhelyazkova and Irina Aktasheva, as well as those who only recently made or have just completed their full length feature film debut.

Brief video clips have been made with established names like Irina Aktasheva, Mariana Evstatieva, Iglika Trifonova, Milena Andonova and Zornitsa Sofia, with young women film directors, who boast successful debuts in the feature films - Maya Vitkova and Christina Grozeva, as well as Ralitza Petrova and Ruzye Hasanova .Exclusive interviews have been made with the other women directors. All they talk about their films, about the cinema and the world, about what it is to be a woman director, of the difficulties they have encountered along the path of their professional realization, about their successes. We have also provided links to their films.

Those of you who take pains to throw a glance at the site’s content will have the opportunity to get acquainted with brilliant examples of professionalism and creativity. And when you get acquainted with the biographies and their filmography, interviews, when you read the articles and reviews of their films, you will for sure feel inspired and will be able to expand your knowledge, you will understand the importance of their work and their worthy place in the Bulgarian cinema.

Although the project "Women film directors in the Bulgarian feature film" has been realized thanks to an enormous affection for the profession and respect for the Bulgarian women directors, we do not pretend to be exhaustive. There may be errors and inaccuracies. We did what we could within our capacity not to forget and not to skip anyone. Hopefully, the site will change, it will be supplemented, developed, and will exist for many years. We will be grateful for all well-intentioned opinions, recommendations, remarks and as far as it is possible, we will try to reflect them in the content of the site.

We want our films to be seen by the biggest possible number of spectators and believe that this site will be of help in this respect. Whether you're a scientist, artist, filmmaker, or you just love the cinema, we hope that our site will be a source of knowledge and inspiration to you!

The implementation of the project was made possible thanks to the support of many colleagues and people who are not directly connected with the cinema, but they indeed liked our idea and all of them helped us according to their possibilities.

For example, the Russian Centre and the American Centre at the Sofia city library provided to us their premises which helped us a lot during the shooting and for which we are extremely grateful to them. The direct executors of the project, apart from me as project leader, were Stefan Nikolov, Boriana Mateeva, Galina Gencheva, Blagovesta Kirova, Slobodan Milovanovic, Penka Belcheva, Svetla Neykova, Bozhidar Simeonov and David Vakrilov. Prof. Emilia Stoeva,  Alexander Donev and Irina Lyubenova gave us invaluable support and cooperation. I owe them gratitude for their work.

We are also grateful for the cooperation of our media partners Dnevnik.bg and Radio "Sofia", as well as our partners under the project - "Audiovideo "Orpheus" and Municipal  cultural institute Krasno Selo.

And finally, the most important thing: This project would not be realized without the financial support of the "Culture" Program of Sofia City Municipality.

Once again we express our sincere gratitude to all the people who supported us.