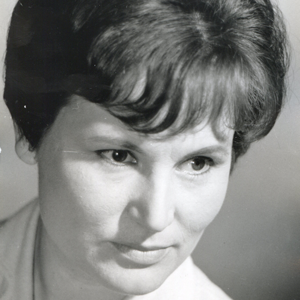 Irina Aktasheva was born on 6 October, 1931 in Yolatan, Turkmen SSR, USSR. She graduated acting with Sergey Gerasimov and Tamara Makarova at the All-Russian State University of Cinematography, VGIK in Moscow in 1953 where she met director Hristo Piskov, whose partner in the profession and in life she remained until the end of his days. She has worked at the Film Actors’ Theatre in Moscow (1953-1955). After their return to Bulgaria in 1955 the two worked at the Feature Film Studio, to begin with as assistant directors. Irina Aktasheva has one role to her name – Lyudmila in The commander of the detachment (1959) directed by Ducho Mundrov in which she acts opposite Kosta Tsonev. The debut of the two young film directors Poor man’s street (1960), awarded First Prize at the Golden Rose Feature Festival in Varna, heralded the emergence of a new phenomenon in Bulgarian filmmaking. Their first success was followed by another with their second film There is no death (1963). But their third film Monday morning (1966) was banned for 22 whole years – until October 1988. In 1989 it was awarded the Special Prize of the Union of Bulgarian Filmmakers, the Best Actress Award to Pepa Nikolova and the Prize for Cinematography to Dimo Kolarov.

In the ten years that followed, years in which the two were forced to keep a low profile, the film directing couple made documentaries and commercials but were ever on the lookout for a good script. That was how they met young and talented poetess Blaga Dimitrova. For them she wrote the script to the film Avalanche (1982). But the censors from the artistic commission were ever on their toes and the project was shelved for years. A book based on this script was written, released in 1971. The film was finally made in 1982; it was awarded the Special Prize at the International Film Festival in Delhi, India in 1983. Irina Aktasheva and Hristo Piskov made their comeback to the big screen with the filmLike a song (1973), awarded Second Prize and the Critics’ Award at the Bulgarian Feature Film Festival in Varna. Sunstroke (1977), based on Georgi Djagarov’s play This small land, starring Armen Dzhigarkhanyan and Only you, my heart, based on Rudenko Yordanov’s novelette Blessed Lucas and starring Alexey Petrenko were much-suffered works in which the two continued to uphold their civic position. Irina Aktasheva wrote the screenplay to Live dangerously (1990), the feature film debut of her daughter Natalia Piskova, loosely based on Alexander Tomov’s Memory.

The Union of Bulgarian Filmmakers