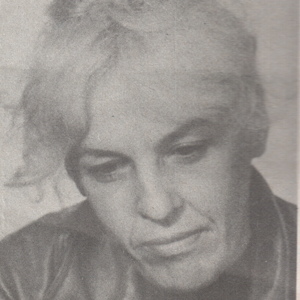 Lada Boyadjieva (1927-1988) is the first female director of documentaries in Bulgaria. She was born in Sofia on 31 August 1927. Until 1949 she studied journalism in Paris where she worked for the Bulgarian embassy press office. In 1953 she graduated film directing in Prague where she met her future husband, film director Yanush Vazov. The two made several documentaries together – Our schoolteacher (1955),Four cakes of bread (1960), Asen Zlatarov (1965). After her return to BulgariaLada Boyadjieva worked at the Newsreel and Documentary Film Studio from 1953 until 1959, directing the films I am a tractor driver (1954), Golden apples (1954), Yves Montand singing (1957), How fairytales come to life (1957), B ulgarian National Folk Song and Dance Ensemble (1960), Achaeans (1961).

The most fruitful period in her career was her work at the Popular Science Film Studio in Sofia (1959-1965). Lada Boyadjieva has made 54 documentary, popular science, educational and promotional films. She has made a tangible contribution to the development of films, tracing the history of art – The man from the stage (1982), Dechko Uzunov’s truths. Lada Boyadjieva showcases the history and the beauty of the world we live in in her films Books of stone (1963), Tadmor P almyra – the dead city (1963), Thebes (1963), Giza (1963), The return of the icons (1965).

In 1965 she started work at Boyana Film Studio. Together with Yanush Vazov she started work on the feature film Return (1967), based on Kiril Vidinski’s novel Submariners. The film was completed in 1967 but was only screened at the end of 1989, one year after Lada Boyadjieva’s death, as it was one of a number of movies banned in the mid-1960s. Return was the first film in which mention was made of the Soviet concentration camps under Stalin. With their second film Dissenting opinion (1970), based on the novelette by Alexander Karasimeonov Star witness, theBoyadjieva-Vazov tandem once again demonstrated their commitment to conflicts and problems in society. The next two feature films – The wind of travel (1972) and Visa to the ocean (1974) were LadaBoyadjieva’s standalone directorial work. After them she continued to direct documentaries, some of which were devoted to the Banner of Peace Assembly (1978), Unity, creativity, beauty (1979), Architects of the future (1979), A lesson in Bulgarian (1984).

Our schoolteacher (1955) co-directed with Yanush Vazov