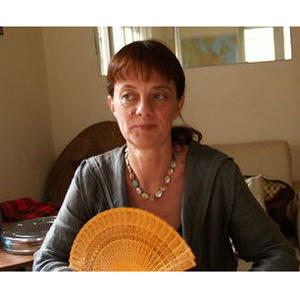 Milena Andonova was born on 5 January, 1959 in Bourgas. In 1982 she graduated Film and TV Directing at the National Academy for Theatre and Film Arts “Krastyo Sarafov”, in the class of Prof. Hristo Hristov. Her internship as film director was with Measure for measure, a film directed by Georgi Dyulgerov, where she also had the small role of Miro. This was her second role in cinema after playing one of Alexandrov’s daughters in the film The white room (1968), directed by her father Metodi Andonov. She later specialized dramaturgy in Berlin. Her contacts there helped her make her debut feature film Monkeys in winter, a co-production, alongside her sister Nevena Andonova as producer. The film earned a Golden Rose Grand Prix at the “Golden Rose” Bulgarian Feature Film Festival, Varna in 2006, the Jury Prize in the East of the West section of the Karlovy Vary international Film Festival, 2006 and a dozen other awards in Bulgaria. Answering the question: “What do you think of the label “women’s films”, which directors do you regard as your “role models” Milena Andonova says: “I love Vera Chytilová’s creative audacity, Jane Campion’s refined femininity, Sofia Coppola’s delicate sense of psychology and humor, but I am in love with directors like Bunuel, Antonioni, Hitchcock. To my mind there is no such distinction - “men’s” and “women’s” films.”

Milena Andonova made her second film Inner Voice (2008) for television, the screenplay is by Krasimir Krumov-Grets.

The film took part in more than 20 festivals in Europe, Asia and America.