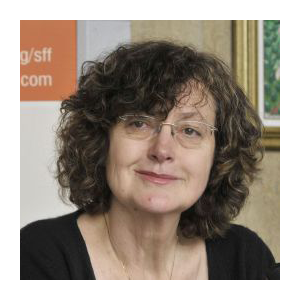 Adela Peeva’s films Whose Is This Song? and Divorce Albanian Style are the first Bulgarian or Balkan documentary films to date to have been nominated by the European Film Academy (EFA) for Best European Documentary - Prix ARTE.

Adela Peeva, director and producer was born in Razgrad,Bulgaria. She graduated Film and TV Directing at the Academy for Theatre, Film, Radio and TV in Belgrade in 1970. She has worked as film director for TV channels in the former Yugoslavia. Upon her return to Bulgaria she started work as director of popular science and documentary films at Vreme Studio where she made upwards of 50 documentaries. The authorities banned her films Mothers (1981) and In the name of sport (1983). The two were only screened in this country and abroad after the democratic changes in 1989.

Adela Peeva made a successful debut in feature filmmaking in 1988 with her film The Neighbour, one of the top five Bulgarian movies with the largest attendance in 1988. It was selected for participation in the Women's Film Festival in Sceaux, Paris and the Madrid International Film Festival.

In 1990 Adela Peeva set up her own production company Adela Media. She has made over 30 documentaries jointly with partners from Germany, the Netherlands, Switzerland, Finland, Denmark, Belgium and Turkey, Serbia and the TV channels ZDF/ARTE, RBB/ARTE, WDR, RTBF, YLE/TV1, SRI, TV-Facta, Б92. For her films she has received financial support under the programmes Eurimage, MEDIA, the KulturKontakt Austria Foundation, the Jan Vrijman Fund and the SOROS documentary fund.

That was how her films Wherefore By Their Fruit You Shall Know Them (1998) and The Unwanted (1999) appeared, made possible thanks to the financial support of the National Film Centre and partners from abroad. The film Whose Is This Song? (2003), a Bulgaria, Germany, Belgium, Finland, Denmark and Netherlands co-production has remained emblematic of Adela Peeva’s career, receiving a European Film Academy nomination for best documentary for 2003. It has taken part in over 50 international film festivals, among them Tribeca in USA and IDFA (International Documentary Festival), Amsterdam, the Netherlands. It is holder of 17 national and international awards and distinctions among them: the Golden Rhyton, Plovdiv – 2003, the Silver Conch Prize and FIPRESCI Award, Mumbai International Film Festival - MIFF' 2004, the Prix Bartok, Ethnographic Film Festival - Paris 2004, Gibson Impact of Music Award, Nashville Film Festival – 2004, Second Award and Award of the Student Jury at Crossroads Europe International Documentary Film Festival Lublin, Poland – 2005 and The Best Film and Award for Innovation, Sardinia International Ethnographic Film Festival – 2006. Her next film Divorce Albanian Style (2007) proved no less successful – it has taken part in over 30 festivals in this country and abroad, winning 12 awards.

In 2010 she made the acclaimed documentary The Mayor (Award of the City of Sofia for outstanding achievement in filmmaking, Best Director Award at the Golden Rhyton Festival and Best Documentary Award of the Bulgarian Film Academy) and in 2013 - Searching for Spisarevski.

In 2011 Adela Peeva was a special guest at the Cannes Festival, one of the 20 prominent European film directors invited to the celebrations of 20 years of the MEDIA programme. She is a member of the European Film Academy (EFA) and the Federation of European Film Directors (FERA) Executive Committee; she has been a member of the juries of the festivals in Cannes, Berlin, Locarno, Sarajevo, Mumbai, Belgrade and the European Documentary Film Academy. Adela Peeva has taken part in meetings and conferences and conducts seminars in Finland, USA, Ireland and Italy; visiting lecturer at the Universities of Oklahoma and Loyola, New Orleans, USA in 2009.

The Neighbour (1988). One of the top five Bulgarian movies with the largest attendance in 1988. Screened in Hungary, Germany and Russia. Aired by Austrian TV and ARTE TV channel. Selected for participation in the Women's Film Festival in Sceaux, Paris and the Madrid International Film Festival.

Searching for Spisarevski (2013), a documentary made jointly with Bulgarian National TV and with the support of the National Film Centre, Sofia Municipality’s Culture programme and the MEDIA programme.

- Award of the City of Sofia for outstanding achievement in filmmaking, 2010

Special screening of the film at the Fine Arts Museum in Boston, 2008.

The documentary Whose Is This Song? is available at the video libraries of more than 50 universities in USA, most notably Berkeley and Harvard. The film is used as a training aid at a number of European universities – in Sweden, the Netherlands, France, Italy and Austria.

Whose Is This Song? has been aired by 17 national TV channels in Europe, as well as in Brazil, Taiwan, and India. It has had dozens of specialized screenings at different seminars and anniversary celebrations, including at the European Parliament and during the Organization for Security and Cooperation in Europe (OSCE) session in Sofia.

Selected Filmography prior to 1990

Selected for FESTRIO in Fortaleza, Brazil.

The film was banned and was not screened because of the way it criticizes and denounces the moral hypocrisy of society under socialism.

Selected and screened in its censured version at the festivals in Oberhausen, Leipzig and Bilbao.

One more film banned from the time it was made until 1989. The film reveals the closely guarded secret of the brutal training methods of elite athletes. Before the film was even completed the secret services confiscated all film material shot. The first public screening only took place after the democratic changes in 1989. In 1990 the film received the Film Critics Award at the Golden Rhyton National Film Festival; it was invited and screened at the Short Film Festival in Berlin as well as in USA and Hungary. It was screened at the special Adela Peeva film portrait programme at the film festival in Selb, Germany.

Link to the site: http://adelamedia.net/