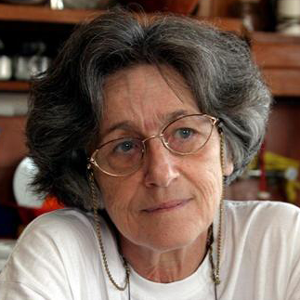 Ivanka Grubcheva (1946-2013) was born in Sofia on 28 July, 1946. In 1966 she graduated Cinema and TV Directing at the Film University in Babelsberg, Germany. She has worked as film director at the Bulgarian National TV, (1967) as assistant director and producer-director at Boyana Film Studios (1969-1991), where she headed the Alpha artistic unit from 1987 until 1991. She has lectured film editing at the Cinema and TV department of the Krastyo Sarafov National Academy for Theatre and Film Arts (1984 – 1991) and cinema and TV directing at the arts faculty of the St. Cyril and St. Methodius University of Veliko Turnovo (1998-2004). In her professional career Ivanka Grubcheva has made over 20 films, the best of them together with screenplay writers the Mormarev brothers, writer Georgi Danailov and cameraman Yatsek Todorov. Generations of Bulgarians have grown up with her numerous feature films and TV series. She has the knack of working with children and enjoys it: Children playing outside (1973), Exams out of the blue (1974), The war of the hedgehogs (1979), The prince’s 13th fiancée (1987). But she also tackles keen social problems and moral and ethical issues: With neither (1975), Surgeons (1977), The worst sin (1982),The golden river (1983), Eva from the third floor (1987), One calorie of tenderness (2002).

One of her last major works was the series The lot (1993) based on Svoboda Buchvarova’s cycle of books Land in the line of fire, starring Kosta Tsonev as the unforgettable banker Boris Skarlatov.

Ivanka Grubcheva’s films have won numerous awards. In 1974 her Exams out of the blue won the UNESCO Award at the Gijon International Film Festival for Young People, Spain. In 1977 Surgeons was awarded the silver medal for directing at the 7th International Festival of Red Cross and Health Films in Varna.

Divorce, divorce: the novella The witnesses (1989)